Where am I? > Home > Bat Research and Conservation Centre (BRCC) 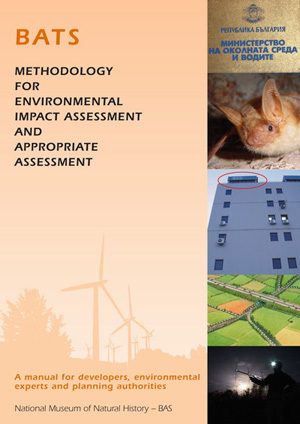 Why was this Manual written?
— To render in a systematic way the contemporary knowledge on bats in Bulgaria and specify the methods and periods of their study;
— To preserve bats in the regions with intensive landscape changes and more specifically in the zones of direct conflict;
— To assist experts involved with environmental impact assessments, environmental needs assessments and conformability assessments so that their reports propose applicable measures for decrease of negative impacts;
— To assist the different units of the Regional Inspectorates of Environment and Waters (RIEW) in the assessment of the quality of submitted reports on bat conservation;
— For assignors to come up with solutions on how to reduce the impact on bats in the conflict zones;
— To facilitate the practical implementation of a number of laws in Bulgaria which deal with the conservation of endangered species.

For whom was this Manual written?
— Experts of the Ministry of Environment and Waters (MEW), RIEW and the Executive Environmental Agency;
— Assignors and experts involved with environmental impact assessments, compatibility and environmental needs assessments;
— Experts from the NGO sector and everyone concerned with this topic. 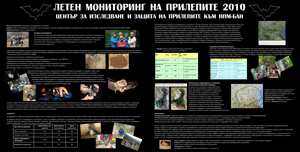 Why BRCC was founded?

Biodiversity Conservation. Bulgaria has a uniquely high diversity of bats. Out of the 35 species established in Europe, 33 species are known to inhabit Bulgaria. All bats are strictly protected under the Bulgarian and the international legislation.
Implementation of plans and projects with national importance. Bats and their habitats are amongst the top priorities within the The National Biodiversity Action Plan (2005—2010) and the National Biodiversity Monitoring System.
Ecological Eurointegration and Partnership. In 1999 Bulgaria acceded The Agreement on the Conservationa of Populations of European Bats (EUROBATS) and other international nature protection conventions, which requires effective implementation of the relevant recommendations and resolutions.
Conservation of the Bulgarian Natural Heritage. Bulgaria is one of the last refuges of populations of bat species, which are already threatened by extinction in the West European part of their ranges. That is why our responsibilities and importance for their protection are undoubted.

The mission of BRCC

BRCC was founded to study the distribution and biology of bats in Bulgaria, to promote their importance and to develop plans and strategies for protection and management of their important habitats.

Organisation, coordination and participation in research projects on distribution and biology of bats.
Implementation of new and modern methods for bat’s study and protection in Bulgaria.
Coordination of the bat ringing in Bulgaria and maintenance of a data base.

Development and implementation of a strategy for long-term national monitoring of the important bat roosts and habitats.
Regular monitoring of important underground bat roosts, forests and wetlands within the scope of the National Biodiversity Monitoring System.
Identifying of important bat sites and submitting proposals for establishment of new protected territories.
Developments of Action plans for threatened bat species.
Participation in the preparation of the Management Plans of Protected Areas.
Conservation measures (SOS BATLINE and others) and advice to people and organisations for solving of practical issues, which involve bats.

Development and maintenance of an information database for the bat species, their distribution and conservation status in Bulgaria, including data for the important roosts/habitats, population size and dynamics, etc.
Maintenance of a library on the bat’s research methods, conservation projects, impact assessments, etc.
Bats in brief [DOC]

Expert advice to people and organisations in cases of bats dwelling in houses, offices, storage rooms and other potential roosts.
Participation in the preparation of statements on Environmental Impact Assessment and Appropriate Assessments reports. [Bats — methodology for environmental impact assessment and appropriate assessment PDF]
Increasing the capacity and training of the experts working in the Regional Inspectorates of Environment and Waters and the national park’s administrations in bat conservation issues.

Exchange of information and experience on species, roosts and bat habitats with regard to their conservation and monitoring on international level.
Participation and organisation of national and international meetings on bat research and conservation.
Assistance to foreign bat workers and teams for field research in Bulgaria.

Report on the implementation of the EUROBATS Agreement in Bulgaria (September 2003 — December 2009). — Agreement of the Conservation of Populations of Europeans Bats, MEW, Sofia. MEW (2010) [PDF]

Guide for the assessement of the favourable conservation status of the NATURA 2000 species and natural habitats in Bulgaria — Bulgarian Biodiversity Foundation, Balkani Wildlife Society, BBI/MATRA — 2007—2008

Research on the fauna in the area of Uzana Resort, Natural Park ‘Balgarka’ — Department of the NP ‘Balgarka’ — 2006—2007

Research of caves and bats in four karst regions in the Western and Eastern Rhodopes Mt. — UNDP Rhodope Project — 2006

Bats (Chiroptera) of Ponor Mountain — GEF, Bulgarian Society for the Protection of Birds — 2005