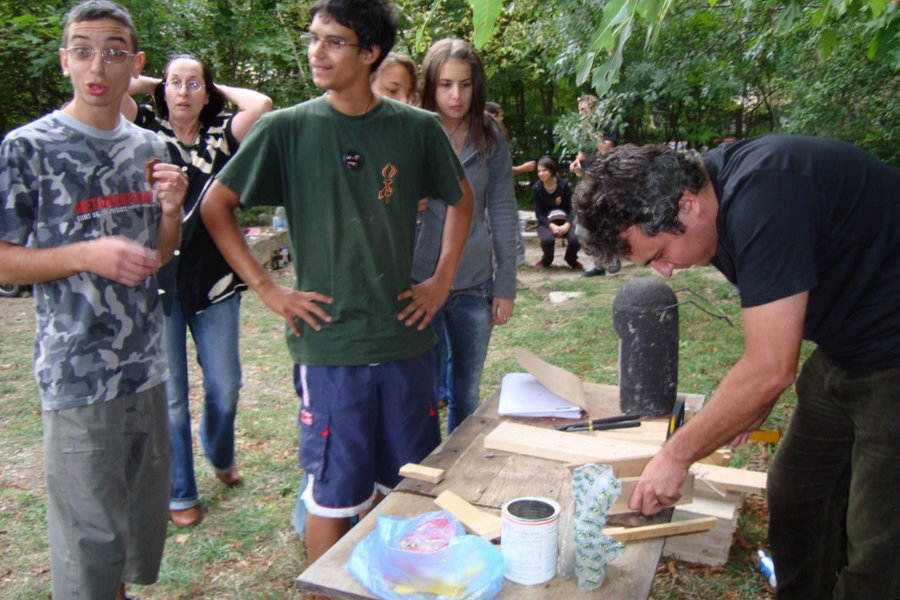 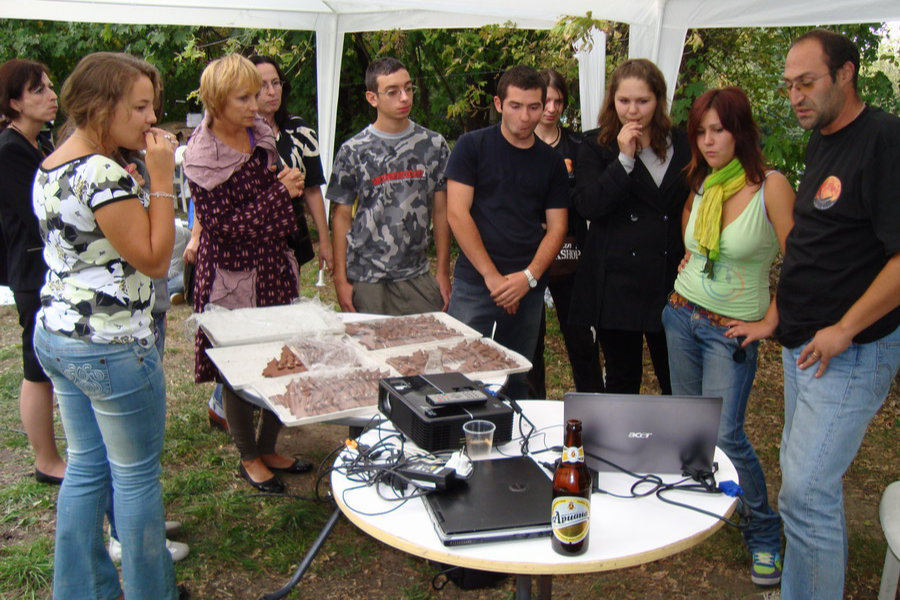 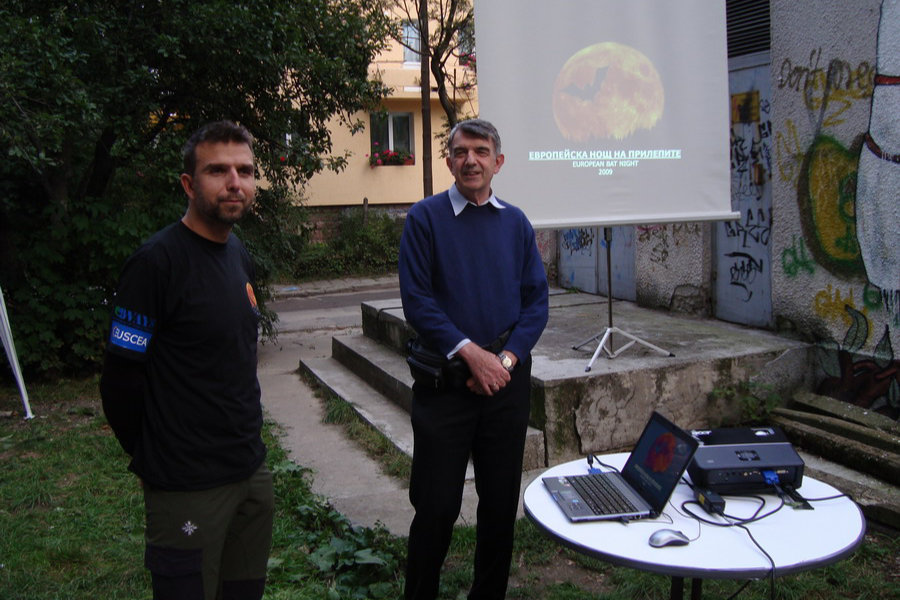 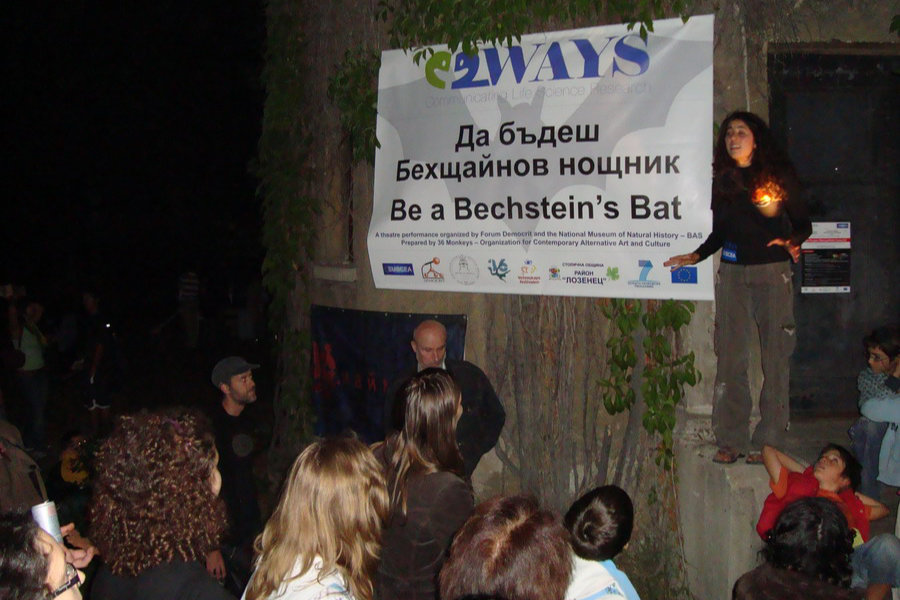 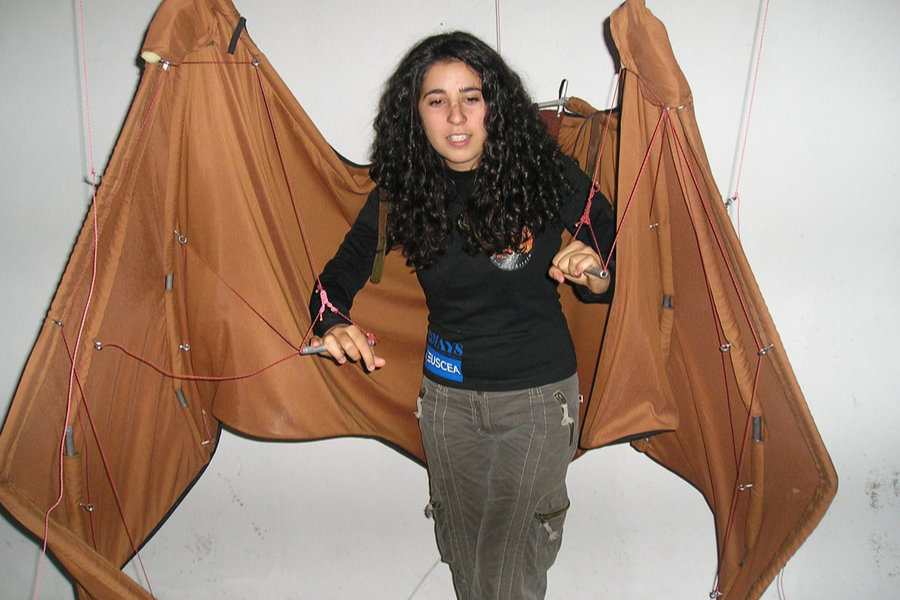 The 13th European Bat Night, organised by the Bat Research And Conservation Centre at NMNHS and the Forum Democrit, took place on the 25th September 2009 in Sofia. The Water Tower in Lozenets Housing Estate was chosen as a natural scenery for commemorating the event.

A winding staircase ascending to the top of the old tower acted as a stage for six spectacular performances of the 45-minute theatrical production of Eva Bechstein’s ‘The Night of the Bats.’ The text was written and the presentation was directed by Gergana Dimitrova from the Organisation for Contemporary Alternative Art and Culture ‘36 monkeys.’ The actors Irina Goleva, Petar Meltev and Petar Henkov took the role of narrators, hanging from the tower ceiling as real bats. The internal design and costumes were created by Elena Shopova and Emil Kirilov. The role of the scientist-bat hunter was played by biology student Antonia Hubancheva.

The spectators — both young and old — gradually climbed up to the top pf the tower, listening with curiosity to the incredible ‘... ancient Bechsteini’s song on death and birth, the solitary winter moon and the new love, waiting to be awakened by someone.’ The production featured an artistic, yet scientifically true tale of the life of a female bat of the species Myotis bechsteinii.

The park in front of the tower accommodated a unique scientific market offering free bat literature. Lectures on different subjects like ‘Let’s get to know bats. Where do they live? What do they eat? How do they accumulate reserve foods? Interesting facts. What is common between men and bats? Localities and threats. How can we help bats? Superstition and prejudice about bats. Research methods — science in action’ were given at several ‘stalls.’ There was a separate table where participants in the event could make bat houses, which the most enthusiastic of them were allowed to carry and hang up in their own yards.

A short presentation, informing the guests of bats’ peculiarities, methods of their investigation, threats and the ways people can help with their protection, was given during the official opening.

The celebration of the European Bat Night is part of Bulgaria’s commitment to keep the Agreement on the Conservation of Populations of European Bats (EUROBATS; www.eurobats.org), requiring from the country to carry out a number of engagements connected with the protection of bats and their localities.

All the 33 bat species in the country are protected by the Biological Diversity Act of Bulgaria as well as by the power of many European directives, conventions and agreements.

The event was part of the European Researchers’ Night, observed in Bulgaria by a number of universities, museums, institutes and other scientific institutions, as well as schools and children’s homes. The event was financially supported by the Project ‘2WAYS — Communicating Life Science Research’ of the European Science Events Association (EUSCEA).