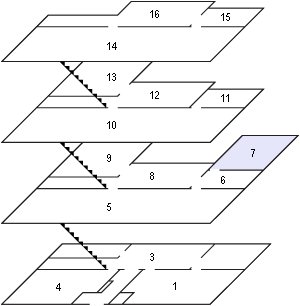 The exhibition of fishes is situated at the second museum floor. A considerable part of the Bulgarian ichthyofauna is exhibited there. The main part represents collection of freshwater species belonging to all common families and genera. Most of them belong to the carp (Cyprinidae), perch (Percidae) and the salmon (Salmonidae) families. The most interesting species in this part of the hall are the endemic for the Balkan Peninsula Struma loach (Barbatula bureschi), Bulgarian loach (Sabanejewia bulgarica) and dark vimba (Vimba melanops) as well as pearl roach (Rutilus frisii), Dnieper chub (Leuciscus borysthenicus), etc.

The ichthyofauna of the Black Sea is also well represented with plenty of species of the coastal area and the open sea. The most interesting of them are the Bulgarian shad (Alosa bulgarica).

Large part of the hall is occupied by quite a large collection of foreign species. Most of them are from the Aegean and Red Sea. There is a lot of interesting species here like the Asian balloon-fishes — Diodon hystrix and Tetraodon inervis, the Mexican cavefish (Anoptichthys jordani), electric catfish (Malapterurus electricus) from Nigeria, Cuban alligator gar (Atractosteus tristoechus) and others.

The diorama Coral Reef in front of Cuba Island is also situated in Hall Fishes. It represents 21 species of tropical fishes, typical for this part of the ocean.