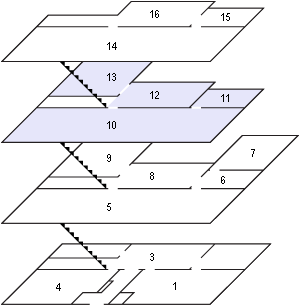 The exhibition of recent mammals is situated in three halls and a foyer on the 3-rd floor. The pair (male and female) of the European bison (Bison bonasus), shut down in 1915 in Silesia is especially attractive in the foyer. The erected on the hind legs, two metres high, male brown bear from the Rila Mts is very impressive too. This bear was recognised as the largest European representative, and was awarded the gold medal of the First International Game Exhibition in Berlin, 1937.

Animals from various systematic groups (primates, carnivorous, cloven-hoofed, solid-hoofed, etc.) from Europe, Asia, Africa, South and North America) are exhibited in the big hall on the 3-rd floor. The dioramas are of special interest:

The smaller hall on the same floor exhibits some particularly rare representatives, such as monotremates and marsupials from the Australian region and Edentata (bradyporids, armadillos and ant-eaters) from South America. Here, in the exhibition of the rodents, the unique mounted preparation of the dormice Myomimus roachi bulgaricus, can be seen; the latter subspecies occurs only in SE Bulgaria, European part of Turkey, and the Anatolian coast of Turkey.