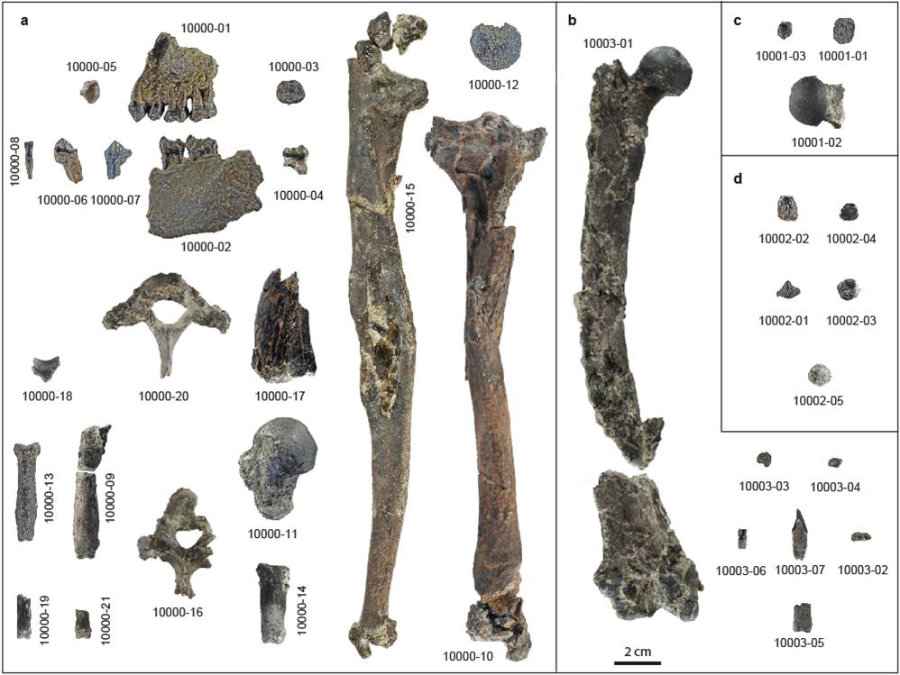 Remains of a new hominid from Germany (more than 11.5 million years old) change our views on the evolution of great apes and humans

The discovery of a 11.62 Million-year-old ape skeleton in Germany now fundamentally changes our views on the early evolution of the human family. These spectacular finds are announced by an international group of scientists from Germany, Canada, Bulgaria and the US in the journal NATURE.

The fossils of the newly described genus and species Danuvius guggenmosi (Genus name after the Celtic-roman river god Danuvius, associated with the Danube river) were discovered between 2015 and 2018 by Madelaine Böhme and her team from the Senckenberg Center for Human Evolution and Palaeoenvironment and Tübingen University, in the active clay pit of Hammerschmiede near Pforzen in the Allgäu area of Bavaria. The paleontological excavations reveal ancient humid and forested ecosystems, that existed in the region, 11.7 to 11.4 million years ago.

Ever since Darwin, the early evolution of humans and our cousins, the living great apes, has been intensely debated. At the centre of these debates is the question of the origin of human bipedality. Did it evolve from an arboreal palmigrade quadruped like living monkeys, a suspensory ape similar to orangutans or knuckle walking ape similar to chimpanzees? Over the last 150 years many hypotheses have been advocated, but supporting fossil evidence has so far been lacking. This changed this week with the publication of a remarkably complete fossil from Germany with direct evidence of the origin of bipedalism.

Danuvius includes the remains of at least four individuals. The most complete skeleton of a male has body proportions most like bonobos. Thanks to completely preserved limb bones, vertebra, finger and toe bones the researchers were able to reconstruct the way Danuvius moved about in its environment. ‘It was astonishing for us to realise how similar certain bones are to humans, as opposed to great apes’, says Madelaine Böhme, the lead author of this study. Danuvius combines bipedality and an ape-like mode of climbing with an upright trunk. This positional behaviour is so unique that the researchers coined a new term, ‘extended limb clambering’. David Begun, a researcher from the University of Toronto, concludes that ‘ELC potentially represents the behaviour of our last common ancestor with great apes, because it combines hindlimb dominated bipedality of humans with forelimb dominated climbing typical for living apes’. These results suggest that human bipedality evolved in arboreal context over 12 million years ago. ‘In contrast to later hominins, Danuvius had a powerful abducted big toe, which enabled it to grasp securely on large and small branches in a tree’, add Nikolai Spassov, a researcher from the National Museum of Natural History at the Bulgarian Academy of Science.

Danuvius was about one metre in height. Females had an estimated weight of 18 kg, less than any living great ape, whereas the male weighted about 31 kg, at the low extreme of modern great ape body size. The thorax was flat and broad and the lumbar spine (lower back) elongated, contributing effectively to positioning the centre of mass over extended hips, knees and flat feet, as in bipeds.

According to the authors of this study, this discovery is a milestone in palaeoanthropology, because it challenges our view of great ape and human evolution. The discovery of the new fossil great ape Danuvius demonstrates once again the important role of the European continent in the evolution of great apes and humans. This discovery shows what were the skeletal features and the locomotion initial for the recent great apes and humans, and give reason to believe that African great apes have a secondary additional specialisation in arboreal adaptation. ‘This fossil also indicates that the European ancestors of African apes and humans differed from living gorillas and chimpanzees’, said David Begun. Begun adds, ‘This newly identified pattern of positional behaviour helps us to understand the starting point from which African apes and humans diverged.’

‘The arboreal bipedality of Danuvius may represent a preadaptation for the transition to terrestrial bipedal walking in an open country or savannah environment. It is known that many mammal species adopt bipedal posture in open environments’, said Nikolai Spassov. ‘New discoveries indicate that the extended posture of Danuvius could be ancestral to possible bipedal locomotion of Graecopithecus in the late Miocene savannas of the Balkans and the Eastern Mediterranean, where this potential hominin lived 7.2 Ma ago’ adds Spassov.