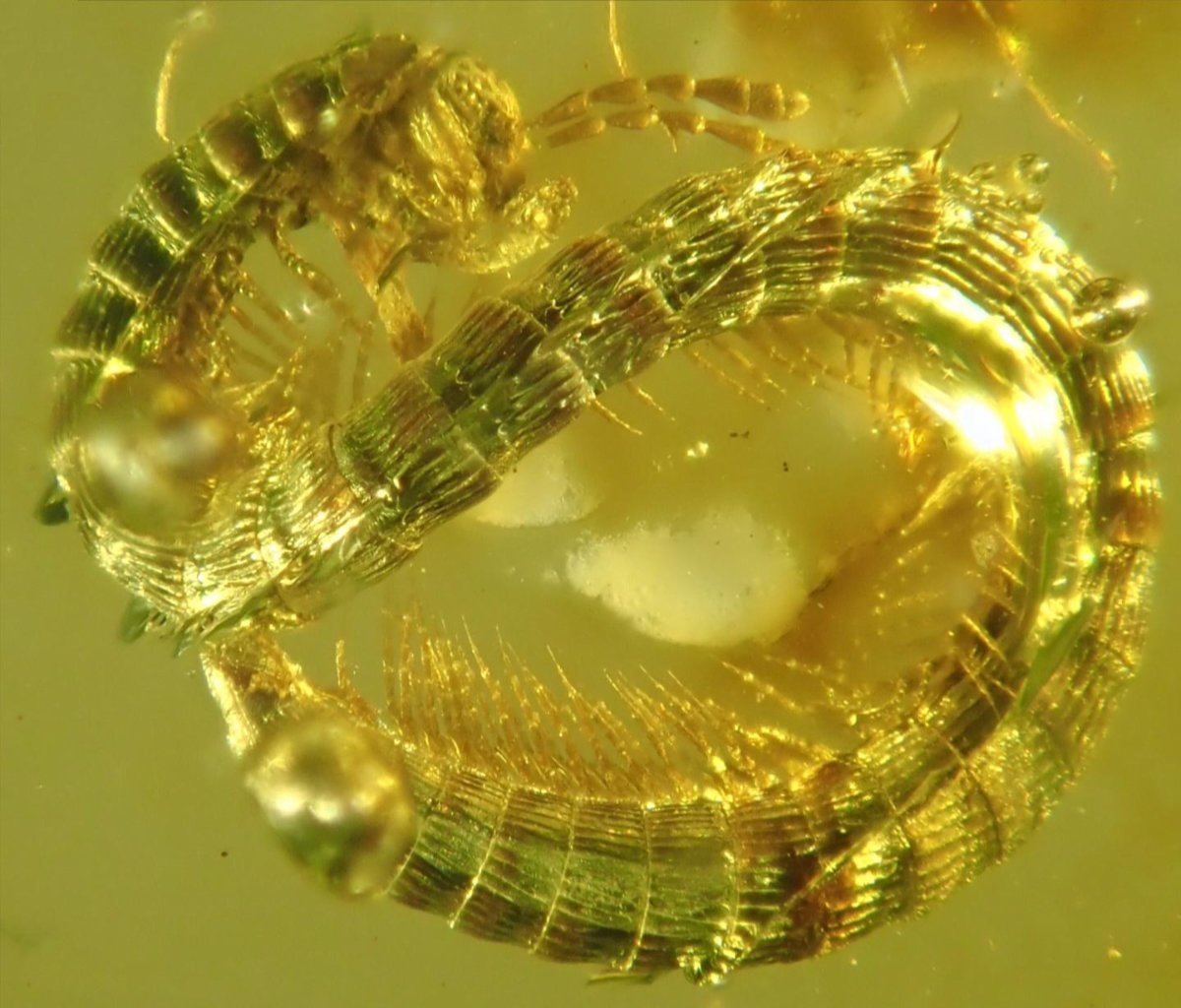 Even though we are led to believe that during the Cretaceous the Earth used to be an exclusive home for fearsome giants, including carnivorous velociraptors and arthropods larger than a modern adult human, it turns out that there was still room for harmless minute invertebrates measuring only several millimetres.

Such is the case of a tiny millipede of only 8.2 mm in length, recently found in 99-million-year-old amber in Myanmar. Using the latest research technologies, the scientists concluded that not only were they handling the first fossil millipede of the order (Callipodida) and also the smallest amongst its contemporary relatives, but that its morphology was so unusual that it drastically deviated from its contemporary relatives.

As a result, Prof. Pavel Stoev of the National Museum of Natural History (Bulgaria) together with his colleagues Dr Thomas Wesener and Leif Moritz of the Zoological Research Museum Alexander Koenig (Germany) had to revise the current millipede classification and introduce a new suborder. To put it in perspective, there have only been a handful of millipede suborders erected in the last 50 years. The findings are published in the open-access journal ZooKeys.

To analyse the species and confirm its novelty, the scientists used 3D X-ray microscopy to 'slice' through the Cretaceous specimen and look into tiny details of its anatomy, which would normally not be preserved in fossils. The identification of the millipede also presents the first clue about the age of the order Callipodida, suggesting that this millipede group evolved at least some 100 million years ago. A 3D model of the animal is also available in the research article.

Curiously, the studied arthropod was far from the only one discovered in this particular amber deposit. On the contrary, it was found amongst as many as 529 millipede specimens, yet it was the sole representative of its order. This is why the scientists named it Burmanopetalum inexpectatum, where 'inexpectatum' means 'unexpected' in Latin, while the generic epithet (Burmanopetalum) refers to the country of discovery (Myanmar, formerly Burma).

Lead author Prof. Pavel Stoev says: We were so lucky to find this specimen so well preserved in amber! With the next-generation micro-computer tomography (micro-CT) and the associated image rendering and processing software, we are now able to reconstruct the whole animal and observe the tiniest morphological traits which are rarely preserved in fossils. This makes us confident that we have successfully compared its morphology with those of the extant millipedes. It came as a great surprise to us that this animal cannot be placed in the current millipede classification. Even though their general appearance have remained unchanged in the last 100 million years, as our planet underwent dramatic changes several times in this period, some morphological traits in Callipodida lineage have evolved significantly.

Co-author Dr Thomas Wesener adds: 'We are grateful to Patrick Müller, who let us study his private collection of animals found in Burmese amber and dated from the Age of Dinosaurs. His is the largest European and the third largest in the world collection of the kind. We had the opportunity to examine over 400 amber stones that contain millipedes. Many of them are now deposited at the Museum Koenig in Bonn, so that scientists from all over the world can study them. Additionally, in our paper, we provide a high-resolution computer-tomography images of the newly described millipede. They are made public through MorphBank, which means anyone can now freely access and re-use our data without even leaving the desk.'

Leading expert in the study of fossil arthropods Dr Greg Edgecombe (Natural History Museum, London) comments: 'The entire Mesozoic Era — a span of 185 million years — has until now only been sampled for a dozen species of millipedes, but new findings from Burmese amber are rapidly changing the picture. In the past few years, nearly all of the 16 living orders of millipedes have been identified in this 99-million-year-old amber. The beautiful anatomical data presented by Stoev et al. show that Callipodida now join the club.'